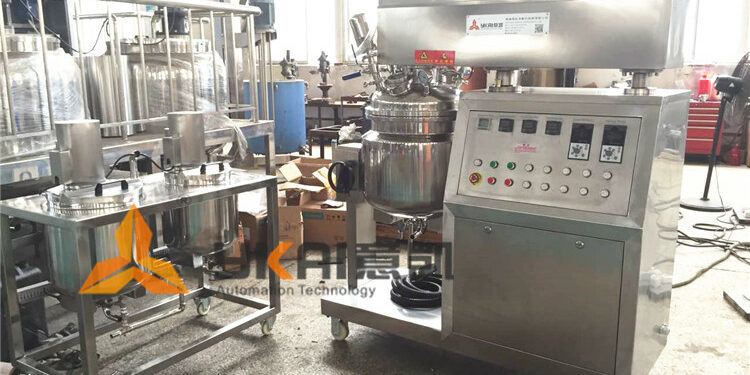 Some time ago, the Ministry of Foreign Trade received an inquiry from customer in the United States. The women is engaged in cosmetic industry and wants to develop a new process for the emulsion formulation of natural plant. In order to ensure  smoothly conduct large-scale production, the customer would like to buy a 50L pilot of small batch vacuum emulsifying machine. After owning mature production craft, then put into mass production. After numerous email communication, the customer is extremely satisfied with our machine and finally purchase 50L  cosmetics vacuum emulsifying machine . Now, the machine is finished and be ready for shipping.

The medium size of YK’s  cosmetics vacuum emulsifying machine  is composed of two size: ZJR-30 and ZJR-50. Most customers will choose 30L or 50L equipment as test equipment, small number of customers will choose 100L, 150L as part of pilot equipment.due to special production. Pilot as part of a mass-produced front, which is an important part of the collection of scientific data for the smooth conduct of large-scale production and to ensure the smooth conduct large-scale production.

How does the automatic vacuum emulsifying mixer work?
May 15, 2020

Hand Sanitizer with alcohol for quick cleaning of hand
March 23, 2020