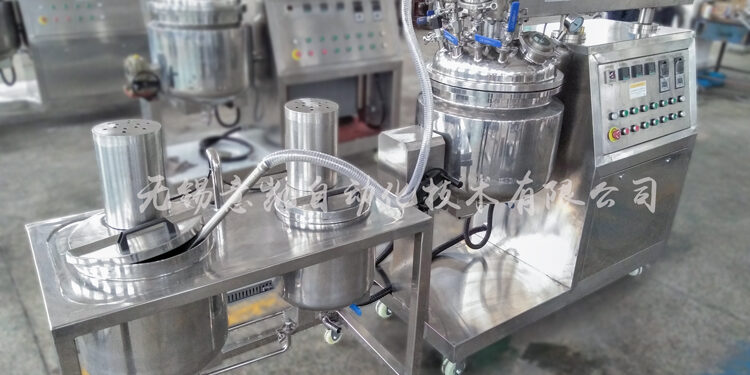 With the increasing market for skin care products, skin care products are classified according to different standards. However, from the structural aspect of skin care products, the main ingredients are oils and fats, creams, and lotions. This can be categorized by oil size, including cold creams, neutral creams, weak oil emulsions and creams, anhydrous, oily products, water-based glues and lotions. Simply speaking, it is oil-in-water or water-in-oil. Whether it is oil-in-water or water-in-oil skin care products, the current mainstream cosmetics production equipment is generally prepared by vacuum emulsifier equipment. One machine can get raw material pretreatment, heating, cooling, temperature control, stirring, homogeneous emulsification and vacuum defoaming! Then let’s take a look at the production steps of a representative intelligent ZJR series vacuum emulsifier to prepare cosmetic emulsions!

The aqueous phase used in cosmetics needs to be prepared using purified water. The prepared purified water is put into the water phase pot while adding other aqueous phase raw materials. Similarly, the stirring speed and heating temperature and time are set according to the process. In addition, if the cosmetic formulation contains a water-soluble polymer, it can be formulated separately. This was dissolved in water, and stirred sufficiently at room temperature to uniformly swell to prevent agglomeration. If necessary, homogenize and add the aqueous phase before emulsification. It is necessary to avoid prolonged heating to avoid viscosity changes. To supplement the water volatilized during heating and emulsification, add 3% to 5% water by formula. The exact amount can be determined by analyzing the moisture of the finished product after the first batch is made.

The emulsification process is mainly carried out in the main emulsion tank of the vacuum emulsifier. According to the feeding sequence of the production process, the raw materials in the water tank are sucked into the filter by vacuum suction. Add in a stainless steel emulsified pot in a certain order, and stir and emulsifie for a certain period of time at a certain temperature (such as 70-80 ° C). In the whole emulsification process, the method of adding the oil phase and the water phase (the oil phase is added to the water phase or the water phase to the oil phase), the speed of addition, and the stirring conditions, emulsification temperature and time designed by the vacuum homogenizer equipment, The structure and type of the emulsifier have a great influence on the shape and distribution state of the emulsified particles. The speed and time of homogenization vary with different emulsifying systems. The system containing water-soluble polymer, the speed and time of homogenization should be strictly controlled to avoid excessive shearing, damage, polymer structure, irreversible changes, and change the rheological properties of the system. If the formula contains vitamins or heat-sensitive additives, it is added at a lower temperature after emulsification to ensure its activity, but attention should be paid to its solubility.

It is usually stored in a filling machine one or a few days after storage. The quality of the product should be assessed before filling, and the quality can be filled before filling. As the technology of cosmetic research and development becomes more and more mature, there are many kinds of empirical methods for preparing emulsions. The manufacturer can choose the method of preparation according to the needs of the product and personal experience. However, no matter which method is chosen, it must first meet the basic requirements for cosmetic production. Mature technology and formula, choose the right emulsification equipment, and use reasonable preparation methods to get high quality products.

Cosmetics preparation vacuum emulsifier complete sets of equipment. Its scientific and rational combination and intelligent function have greatly reduced the production process. It has the advantages of feeding, discharging and convenient cleaning. Wuxi YK specializes in the development and production of vacuum emulsifier, high shear homogenizer, and planetary mixer. Welcome the cosmetics equipment industry and customers in the cosmetics industry to come to our company for inspection and guidance!

Heavy rain in Wuxi, looking at the sea in the whole city | Yekeey vacuum emulsifying mixer shipped by the wind and waves
July 7, 2020

How to install and maintain the stainless steel mixing tank
July 1, 2020

Does the laboratory mixing equipment choose a homogenizer or a dispersion plate?
June 22, 2020