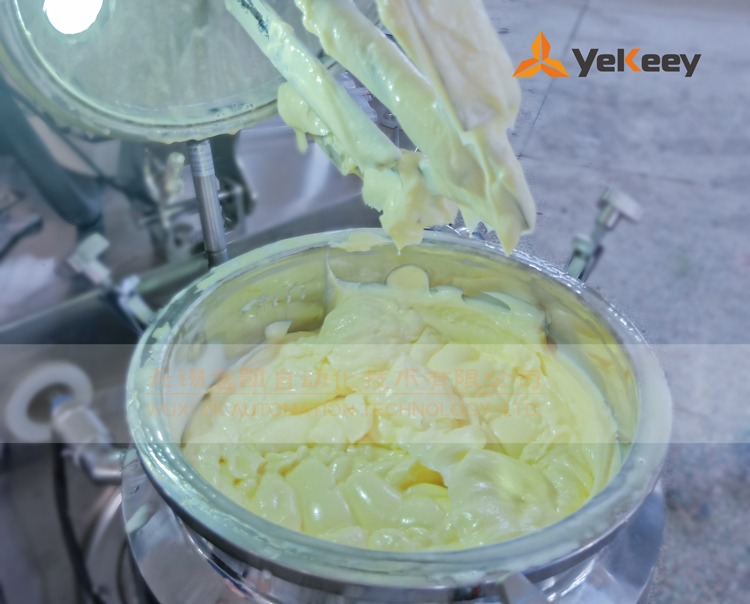 First, let’s take a look at the traditional mayonnaise making machine and technology. The traditional processing technology of mayonnaise is to add various materials such as egg yolks, then add a small amount of vinegar (about 1/3), then add vegetable oil under manual or simple blender stirring, and finally add the remaining vinegar and stir until a semi-solid paste. . The product produced by this process has poor stability and is easy to form delamination. After changing the mayonnaise making machine and the process of adding materials, the stability of the mayonnaise product is greatly improved.

2. Mix the egg yolk, mustard and spices. Mustard and spices are generally insoluble in water, while egg yolk is an emulsifier that can dissolve both water-soluble and fat-soluble substances, so the three will form a uniform liquid after mixing.

3. Add the sweet and vinegar and salad oil to the vacuum emulsifier alternately through vacuum suction. Because mayonnaise is an oil-in-water emulsion, to form this state, the ratio of salad oil and vinegar cannot be changed too much during the addition. The traditional method of processing all the salad oil will form a water-in-oil structure in the mayonnaise. The material can be fed evenly through the vacuum suction function of the multifunctional emulsifier.

4. Mix a small amount of vinegar, egg yolk and salad oil in an emulsifying tank to form mayonnaise with a lot of salt.

6. The emulsified mayonnaise can be sterilized at 45°C for 8-24 hours, but the temperature cannot exceed 55°C. At 60°C, the general mayonnaise will solidify.

YeKeey MC series vacuum homogenizing emulsifying mixer is an efficient mayonnaise making machine. It is a non-standard customized equipment that can be reasonably configured according to the customer’s process and is suitable for products that need to be emulsified and stirred under vacuum. It can be equipped with low-speed wall scraping and stirring for emulsification and stirring of high-viscosity products. It can be equipped with a high shear emulsifier, suitable for processes such as dispersion, emulsification, homogenization, stirring and mixing. Vacuum emulsifying mixer is mainly composed of water phase pot, oil phase pot, emulsification mixing main pot, vacuum system, lifting system (optional), electrical control system (optional PLC), operating platform, etc. The raw material receiving technology can process all the ingredients in the production of mayonnaise, including liquid and liquid egg yolk. The control system connected to the automatic weighing equipment ensures that each component can be accurately weighed and stored under good conditions.

Homogeneous emulsification is a key stage in the production of mayonnaise. The MC series emulsifying mixer has developed a temperature-controllable mixing technology, which can generate a stable and highly uniform emulsion. The all-in-one mixer has a high-shear device that can produce very small oil droplet sizes, avoid microbubbles in the product, and prevent flocculation and precipitation. The industrial mixer uses vacuum technology to introduce the ingredients below the surface of the liquid. This leads to instant emulsification, avoids caking and “fish eyes”, and reduces air mixing and foaming. The MC series external circulation vacuum homogenizing emulsifier can not only improve the fineness of the mayonnaise, but also greatly ensure the stability of the mayonnaise.