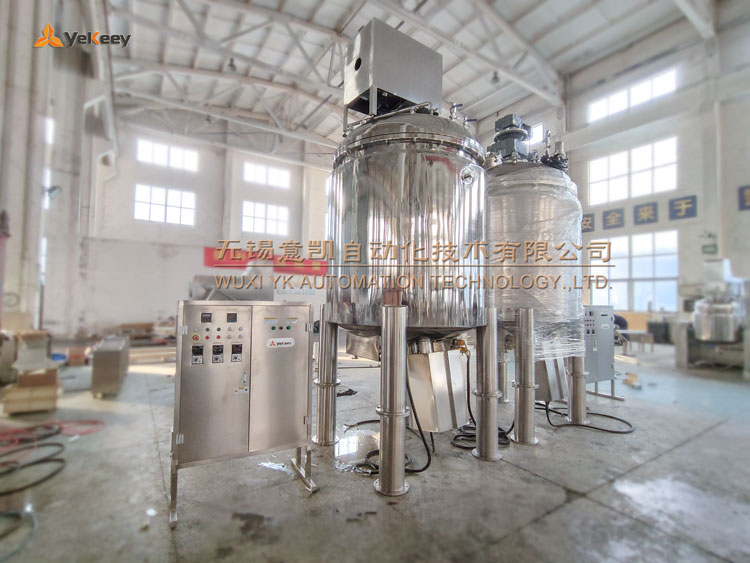 A middleman customer from China ordered a set of SP series bottom homogeneous mixing tanks in YeKeey for the production of customers’ laundry detergent and other products. Now, this set of 3 tons of mixing tank has been produced and will soon be shipped to the Southeast Asian end-user location and put into use as a Liquid laundry detergent production machine.

At the beginning of the communication, the middleman submitted to us the end user’s demand for liquid washing mixing tank products. In the beginning, we recommended the MF series of liquid washing mixing tanks to a middleman, but in the follow-up communication, we learned that end-user customers want to order a homogeneous mixing tank with high-cost performance to improve product quality and ensure the possibility of expanding production of more products in the future. According to customer needs, the SP series can meet these two needs of customers, and the customer’s output is relatively large. The SPA series is particularly good at mass production of industrial mass production, which can ensure the efficient and smooth production of customers.

The components of the SPA-3000 stainless steel bottom homogeneous mixing tank are emulsifying mixing tank, control cabinet, and other parts. The emulsification tank is composed of a tank body, a two-way mixing system, a bottom homogenizer, and a vacuum system.

The material is fed into the main boiler by the rotor pump through the conveying pipeline. The material is stirred in the pot through the PTFE scraper (the scraper always caters to the shape of the pot, sweeps the hanging wall (sticky material), and constantly creates new interfaces, and then cuts, compresses, and folds the material through the two-way agitator. Stirring, mixing, and flowing down to the homogenizer under the pot body, and then through the strong shearing, impact, turbulence, and other processes generated between the high-speed rotating rotor and the stator, the material is cut in the shearing gap. It can be returned to the tank through the pipeline and repeatedly cut, and quickly broken into particles of 200nm～2μm. The micronization, emulsification, mixing, and dispersion of materials can be completed in a short time. Because the homogenizer is in a vacuum state, the materials are stirring the bubbles generated during the process are removed in time. After mixing, the materials in the pot are input into the storage tank by the rotor pump through the pipeline. The heating temperature of the mixing pot is set and adjusted by the temperature controller on the control panel; the mixing system and the bottom are homogenized can be used separately, it can also be used at the same time; the length of the mixing time is controlled by the user according to the properties of the material. After the work is completed, the cleaning ball valve can be opened to clean the pot. The control panel of this machine adopts a button control operation mode; the user can follow the production process adjust suitable speed, temperature, pressure, and mixing time.

①Turn on the power supply→②Feed and heat the main pot (temperature adjustable)→③Close other valves on the lid, open the vacuum valve to vacuum→④Observe the material during the mixing process (time is up) and stop heating→⑤Circular mixing of the material→⑥ Discharge →⑦ Cycle the previous work.

Focusing on the status of the emulsifiers development made in China, can it take another step？
December 24, 2020