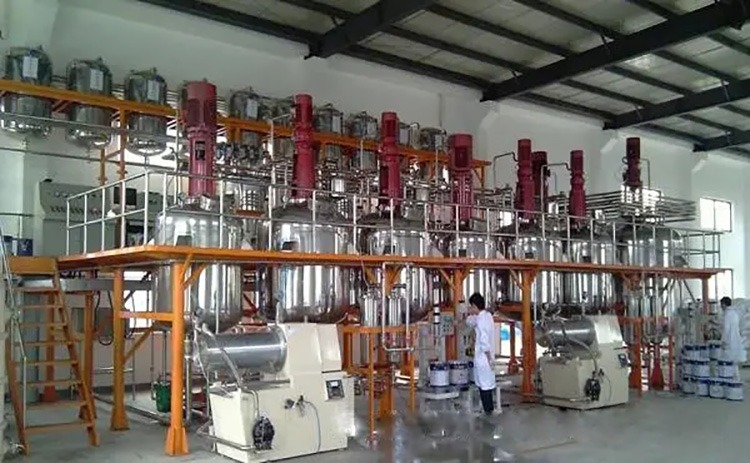 Coating production often requires equipment such as high-speed shear emulsification tanks. With the development and progress of technology, the complete set of coating production equipment now integrates multiple functions, which can independently complete emulsification, dispersion, grinding, refinement, cooling, and filtration with one machine. , Vacuum automatic suction and semi-automatic filling, etc. the whole process. And generally, pulping and paint mixing is done in the same tank. This type of coating production equipment is suitable for the production of water-based coatings and paints. Let’s take a look at its configuration and price with the editor!

The main equipment of the integrated coating equipment includes high-speed shear emulsification and dispersion tank, paint mixing tank, pipeline emulsifier, horizontal sand mill, and powder feeding tank, as well as static mixer, liquid meter, air compressor, electric Control device, filling machine, etc. In general, it is measured by a liquid meter, and high shear is used for emulsification and dispersion. Vacuum automatic suction and defoaming, etc. It belongs to a typical semi-automatic filling process, and only one process is needed from the raw material input to the finished product production.

As mentioned earlier, it can actually be applied to the production of water-based paints and paints, and its extremely important two production steps, pulping and paint mixing, are all completed in the same tank, and the second tank is used as a versatile stainless steel mixing tank. The tank, if the process permits, can also be done in two steps in one step, and finally the latex paint is produced. At the same time, it can also produce real stone paint, putty paste, acrylic aggregate, etc. without any burden. Its unique combined emulsifying head structure enables the material to be fully dispersed and emulsified until it is completely refined, ensuring that the processed material is processed without dead corners under various viscosity states.

The suction system is generally composed of a vacuum pump, a stainless steel vacuum buffer tank, a liquid suction tank and a powder suction tank, an additive tank, and a liquid meter.

Its pulping system is mainly composed of upper and lower heads, a stainless steel dispersing tank with a seal, a high-speed dispersing machine with double dispersing discs, and a high-shear mixing emulsifier.

The discharge filter system is composed of an air compressor and a backflushing bag filter.

Generally speaking, the price fluctuations of integrated paint production equipment are relatively large, which are different due to the size of the output, the difference in configuration, and the difference between the sales area and the sales business. There are eighty to ninety thousand for simple configuration and hundreds of thousands or even four to five million for advanced configuration. The larger the output, the higher the price. It is mainly based on the needs of the purchaser and the economic affordability to decide which gear to purchase the integrated coating production complete set of equipment.

The editor’s introduction to the integrated coating-making machine is here for the time being because it is more specialized and expensive production equipment, so I hope everyone is still fully aware of its functionality and practicality, as well as the prices in various places. Then choose whether to buy or not. If you have any more technical questions about production solutions, please contact YeKeey!