What are the ways of discharging the vacuum emulsifier？ 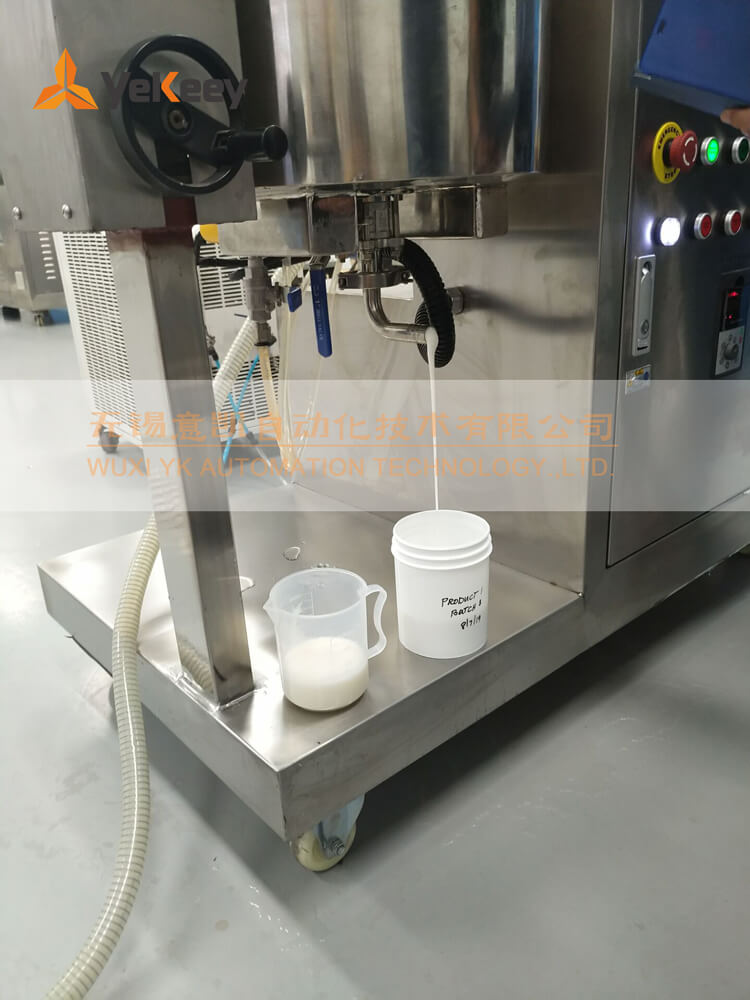 The vacuum emulsifier is kind of a manufacturing machine for creams, lotions, and other products. It is assembled from multiple functional modules and is important mixing equipment for the production of fluid products in a wide range of industries. The emulsifying machine is generally composed of a main emulsifying pot, a secondary oil pot, and a secondary water pot.

Generally, when introducing the vacuum emulsifier, the feeding principle of the emulsifying machine will be emphasized. Because the feeding method of vacuum suction is efficient and hygienic, it is a highlight of the vacuum emulsifier. Many people do not know how the homogeneous emulsified raw materials are discharged from the emulsifying machine. What solutions does the homogeneous emulsifier manufactured by YeKeey have, in terms of discharge? Take a look.

There are generally two ways to discharge materials from vacuum emulsifiers. One is traditional pipeline output. The bottom valve of the emulsification tank of the emulsifier is generally equipped with a bottom valve for discharging. According to the needs of customers, it can be manual or automatic. The bottom discharge valve and pipeline output are also divided into several situations. Generally, materials with low viscosity can be directly transferred to the storage tank or the next process through the bottom valve and the connected pipeline.

For materials with a little higher viscosity, or need to install a filter in the bottom valve, which cannot flow out through the valve pipeline autonomously, a delivery pump can be added. Customers can choose appropriate delivery pumps with different sanitation levels according to the sanitary requirements of the production. Under the action of the discharge pump, the material is discharged through the pipeline at a relatively uniform speed. In addition, pipeline transportation isolates the air and the outside contact, which is relatively hygienic.

In addition to the bottom valve discharge, there is also a way to dump the material through the emulsification tank sideways. The materials are discharged at one time by dumping in the emulsifying pot. This method is very efficient and suitable for mass production. The disadvantage of this discharging method of the vacuum emulsifying machine is that the raw materials are exposed to the air, which is easy to produce bacteria and pollution. This method is suitable for chemical materials, but not for cosmetics, food, and pharmaceutical raw materials.

The emulsification tank dumping discharge method of the vacuum emulsifier, not only makes the discharging work more efficiently but also makes the cleaning of the pot more convenient. The two discharging methods have their own characteristics. Customization can be selected according to customer needs.

4.The material in the emulsifier is transferred to the stainless steel storage tank through the transfer pump for static storage.

1.Another method is to lift the main pot cover hydraulically and then dump the material.

2.After the homogenization and emulsification action is completed, click the hydraulic lift button to open the main bowl lid.

3.Then let the mixing bowl tilt by selecting the wheel next to it.

4.So as to pour out the material.

At present, the discharging methods of the emulsifier are these two, and the operation is quite simple, but you must pay attention to safety when operating.